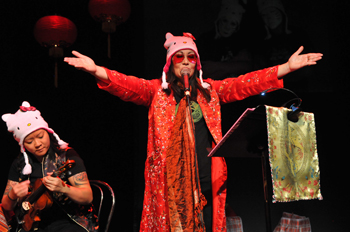 Slanty Eyed Mama will perform LIVE after the film

The entire creative team for this movie is comprised of hyphenate women. I am an actor as well as a director and producer. Kate Rigg is an actor comedian who fronts a band and is also a creative executive producer. Lyris Hung currently tours with the Indigo Girls, is an executive at DAddario strings, and has a death metal band named after her. We think the new America is made up of hyphenates whether that is in the personal, professional, or political realms. We always think long and hard about writing with and about racial language because it is a powerful trigger for both Asian and non-Asian audiences. The whole movie springboards from this idea of deepening our understanding of the humanity behind diversity. Also there are jokes. Lots of jokes.
Back To List