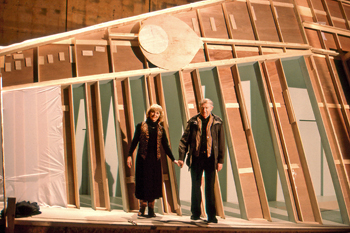 An absorbing and moving account of the romantic and creative partnership of storyboard artist Harold Michelson and film researcher Lillian Michelson, whose jobs might just cease to exist in our digital age. Although the couple was responsible for some of Hollywoods most iconic examples of visual storytelling from The Birds, The Graduate, and Rosemarys Baby to Fiddler On The Roof and Scarface, their contributions remain largely uncredited. Through an engaging mix of animated love letters, film clips, and candid conversations with the couple and their friends Danny DeVito, Mel Brooks, Francis Ford Coppola, and others, this deeply engaging documentary from Academy Award-nominated director Daniel Raim chronicles their remarkable marriage and extraordinary careers through six decades of movie-making history. 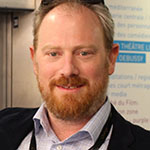 Harold and Lillians story humanizes Hollywood, an industry sustained by numerous hard-working cinema artisans and master craftsmen and craftswomen who give their lives, their genius, and their hearts to the movies. Beyond Harold and Lillians contribution to cinema, their story cant be told without weaving in their 60-year marriage: a creative, challenging, and profoundly loving partnership. Harold and Lillian: A Hollywood Love Story spans the Golden Age of Hollywood through New Hollywood and beyond. Its a portrait of a time, and an intimate chronicle of their epic journey of life, love, family, and making great movies. Youve never met anyone like Harold and Lillian.

AIFF welcomes Indie Institution Zeitgeist Films to the 2017 festival. ​In 1988, Nancy Gerstman and Emily Russo, who had both worked for major distribution and exhibition companies such as Landmark  eatres and First Run Pictures, joined forces to launch their own company, Zeitgeist Films.  They knew a few indie filmmakers personally, including Todd Haynes. Zeitgeist went on to be the first distribution company to release the first films by Haynes, Atom Egoyan, Christopher Nolan, Francois Ozon,  the Quay Brothers, and Guy Maddin. Zeitgeists current roster of filmmakers and releases focuses on world cinema and documentaries and includes AIFF films Manufactured Landscapes (2007), Last Train Home (2010), and Court (Varsity World Film Week 2015). Six Zeitgeist films have been nominated for Academy Awards and one, Nowhere in Africa, won the Academy Award for Best Foreign Language Film.

Nancy Gerstman will join us for the screening of Harold and Lillian: A Hollywood Love Story, Zeitgeists latest documentary along with the films director, Daniel Raim.