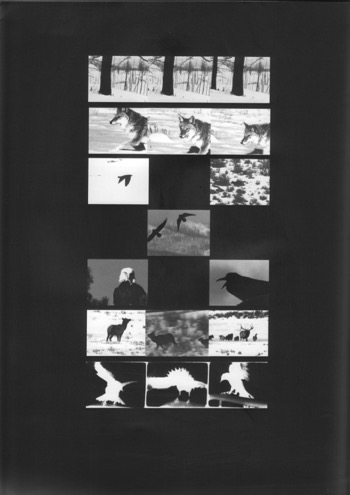 What we see before us is just one tiny part of the world. We get into the habit of thinking, this is the world, but thats not true at all. The real world is a much darker and deeper place than this, and much of it is occupied by jellyfish and things. ~ Haruki Murakami 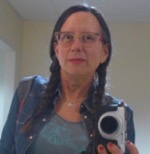 Medusa Smack (2012) is hypnotic and other worldly. The title comes from the fact that over 35 different languages refer to jellyfish as Medusas. And the audience also turns into stone, as Medusa has the power to do, getting so relaxed that we dont move. The Smack is a term used for a group of jellyfish and also for the use of heroin, which is similar to the high induced by watching this tripped-out piece. 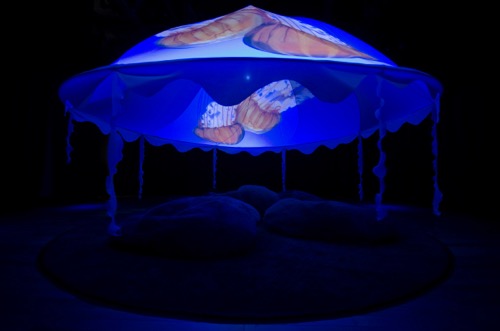 Shot by Eric Edwards and Vanessa Renwick at The Oregon Coast Aquarium during off hours, Medusa Smack features Aurelia (Moon jellies) and the Chrysaora fuscescens​(Pacific Sea Nettles). Colored lighting was used to change the colors of the jellies during the shoot.

Tara Jane O'Neil composed and performed the score. The score was partially comprised of sounds recorded by Harry Bertoia on his own Sonambient sound sculptures, as well as a recording Tara made of Athanasius Kirchers Bell Wheel at the Museum of Jurassic Technology.

Hope and Prey (2010) is a three-channel video of animals hunting and being hunted by each other, a slow build toward oblivion that summons the awesome grandeur and the cold horror of the wild. In composing 3 reels to play side-by-side in a panoramic view, the view is like that out in nature; its a wide landscape where a predator could come at you from anywhere. It is also playing with the fact that predators have eyes on the front of their heads, while prey have eyes on the side of their heads. The adrenaline-pumping dramatic and sometimes brutal nature cinematography by Bob Landis and Vanessa Renwick is transformed and elevated through black and white high-contrast re-composition and a hyper-dynamic score by Portlands infamous underground composer, Daniel Menche.

In the first 12 minutes, we look out at the landscape empty. Then we witness eagles, ravens, elk, bison, coyotes, and wolves hanging out in the winter landscape. The next 11 minutes comprises many chases, ending with a surprise. The victor is not who we think it will be. And then, we are left with the empty landscape once again.