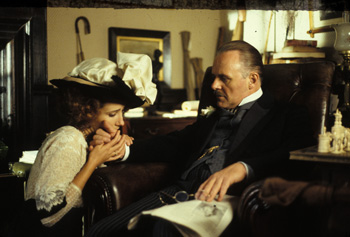 Showing:
Varsity 1 - Sat 3:00 pm (4/8)
One of Merchant Ivorys undisputed masterpieces, this adaptation of E.M. Forsters novel is a story of class relations and changing times in Edwardian England. Two sisters become involved with a wealthy, conservative industrialist and his wife and a working-class man and his mistress. The interwoven fates and misfortunes of these three families and the diverging trajectories of their lives are connected to the ownership of Howards End, a beloved country home. A compelling, brilliantly acted study, the film earned three Academy Awards including Best Actress: Emma Thompson, and Best Adapted Screenplay: Ruth Prawer Jhabvala.

We had been successful with the other two Forster films wed done, Maurice (AIFF2017) and A Room with a View. We thought people would like this one and respond to it. Its a long film, two hours and twenty minutes. A length like that doesnt always bode well. But yes, we had hopes for it. Fortunately, because I wasnt the screenwriter, I didnt have to face the winnowing out of the best storytelling material. Because I knew our writer, Ruth Prawer Jhabvala, knew what to do. Of course when I saw her script for the first time, I probably did the usual yelling: Wheres this? Wheres that? But that always happens with adaptations. Wed do that, and then wed have a bit of a re-think. Ruth or Ismail would tell me,  Thats a good bit, but theres just not room, and Id accept it. Thats how we worked.
Back To List