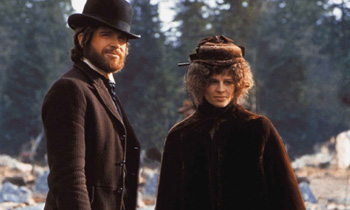 Showing:
Ashland Street Cinema - Fri 6:40 pm (4/7)
This unorthodox dream western by Robert Altman stars Warren Beatty and Julie Christie as two newcomers to the raw Pacific Northwest mining town of Presbyterian Church, who join forces to provide the miners with a superior kind of whorehouse experience. The appearance of representatives of a powerful mining company with interests of its own, however, threatens to be their undoing. With its evocative cinematography by the great Vilmos Zsigmond, innovative overlapping dialogue, and haunting use of Leonard Cohen songs, McCabe & Mrs. Miller brilliantly deconstructs and revitalizes the western genre.

After the screening, join us for a conversation on westerns with the films art director, Phil Thomas, and AIFF2017 Rogue Award recipient Alex Cox

From a 1971 interview with Ray Loynd for the Los Angeles Times: This picture is the most ordinary common western thats ever been told. I picked the story because its the conventional thing. A gambler takes over a town, a whore opens a whorehouse. A neighboring mining company tries to buy him out. He refuses to sell; they send in three killers to get him. Now thats everything youve heard, every cliché. All Im trying to say is, yeah, these things happened but they didnt happen that way. the guy wasnt sure of himself. He was in over his head. The woman was a real whore. Which means she doesnt like it and doesnt like him particularly.