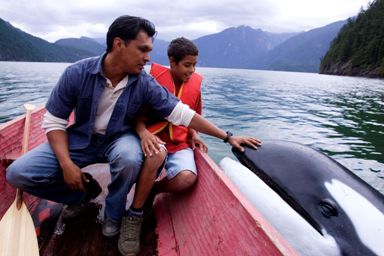 Showing:
Armory - Sat 12:00 pm (4/5)
Varsity 1 - Sun 3:00 pm (4/6)
This family-friendly film is inspired by events that took place in 2001 and shocked animal lovers around the world. Mike Maquinna is the hereditary chief of an Aboriginal village on British Columbia's Vancouver Island. When he returns home to his father's funeral to pay respects and hand over his birth right to a more suitable elder (Graham Greene, Dances with Wolves), his convictions are tested as he faces the true spirit of his people- a stray killer whale from Puget Sound called Luna.

Mike's people, the Mowachaht-Muchalaht, believe that Luna is the embodied spirit of his father, the late chief. But Mike, a man separated from his culture, is disbelieving. Mirrored in Mike's confusion is a troubled Native teen struggling with his own identity as well as a local fisheries officer who must question the science she has practiced. When the resolute Mowachaht-Muchalaht people fight to protect the young killer whale, Mike finds himself embroiled in a struggle that challenges his own spiritual beliefs as well as his notion of home and belonging. [family friendly: Age 8+]
Back To List