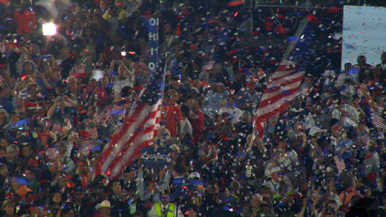 Showing:
Varsity 1 - Thu 6:00 pm (4/8)
Varsity 1 - Fri 3:00 pm (4/9)
Varsity 1 - Sat 12:00 pm (4/10)
Every four years since 1832, delegates from each of the United States and the American territories gather to choose their parties' presidential candidates. A team of celebrated documentary filmmakers, including Daniel Junge (They Killed Sister Dorothy, 2009 AIFF), Steven Bognar and Julia Reichert (The Last Truck, 2010 AIFF) are dispatched to intimately capture the 2008 Democratic National Convention - in behind-the-scenes images, passages, and vignettes. We see the convention through the eyes of Denver's organizers, local press, police, city officials and grassroots protestersall preparing for the impact of the convention on their city. The industry is a peculiar one, pervaded by both a romantic respect for the political icons at its center and the three-ring-circus atmosphere that surrounds them. What emerges from this striking work is a rare glimpse into what makes an event political, what makes the political an event and what makes film, in the right hands, an art. [language]
Back To List