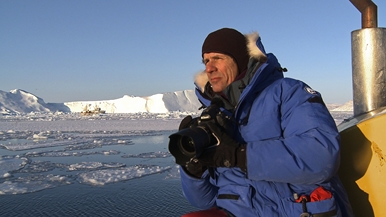 
This hauntingly beautiful film documents the Extreme Ice Survey  an unprecedented project conceived by legendary National Geographic photographer James Balog. With a scientific upbringing Balog had been a cynic about the nature of academic research but his first trip north causes him to put his career and his very well-being at risk. With a team of young assistants he deploys cameras across the brutal Arctic to capture a multi-year record of the world's changing glaciers. Filmed in Iceland, Greenland, Alaska and Montana, Balogs stunning videos compress years into seconds and capture ancient mountains of ice in motion. The time-lapse photograpy reveals the glaciers disappearing at an astonishing rate.

Shot and edited over five years, the film depicts one mans attempt to deliver evidence of global warming. While not overtly political, his unambiguous photographic record goes to the very heart of the issue of climate change.