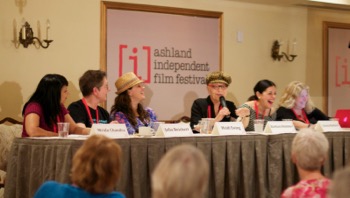 Two great film directors will talk about cinematic adaptations and literary masterworks. James Ivory (AIFF2017 Lifetime Achievement Award) has been acclaimed for his brilliant works based on novels by E.M. Forster (including Maurice and Howards End in this year’s festival), Henry James, Kazuo Ishiguro, and others.Matías Piñeiro has stormed the film festival world in recent years with his playful takes on Shakespeare’s plays and female characters and will present Rosalinda, Viola, and Hermia & Helena at AIFF2017.

Moderator: Bill Rauch is the artistic director of the Oregon Shakespeare Festival. In a total of 14 seasons here, he has directed six world premieres and 16 other plays.​