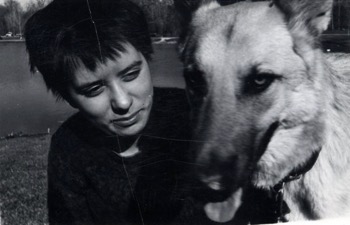 Vanessa Renwick has been self-producing films and videos since the early 1980s. Her DIY aesthetic presents a challenge to an indie film scene that sometimes seems to care more about slickness and commercial success than originality of spirit. NLFU is an eclectic sampling of her very best work, spanning more than 20 years. It will be fast and aggressive, slow and contemplative, hard to pin down—and harder to forget.

See more of Vanessa’s art and film on display at the Schneider Museum of Art from April 5–May 27 and in performance there with Tara Jane O’Neill on Saturday, April 8.

Land of the Free
2016, 2 min
Up above the land, in the clouds, borderless. Standing Rock on my mind.

The Yodeling Lesson
1998, 3 minutes
NO HANDS! NO BRAKES! NO CLOTHES!

Richart
2001, 23 minutes
A tour through the mind of obsessive collagist and front yard artist Richard Tracy.

Crowdog
1984/1998 , 7 minutes, Super 8 to SD video
This journal entry of a film describes a young artist in the midst of over two years of shoe-free peregrinations with a spare, mesmerizing narration that reflects a landscape ranging from the slimy underbelly of dirty Chicago to a hitchhiker’s perch in the back of a dusty pickup truck.

layover
2014, 6 min, HD video
Every autumn, a South America-bound colony of Vaux’s Swifts numbering in the tens of thousands enjoy a layover in a Portland, Oregon elementary school chimney. Sunset brings a vortex of swirling shapes, whose each tiny piece combines to form a hypnotic, ever-changing pattern.