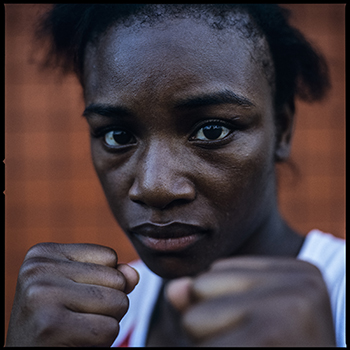 Documentary
86 minutes
2015
Director(s): Zackary Canepari, Drea Cooper
USA
t-rexthefilm.com
Thu 3:20 PM Varsity 2
Fri 12:20 PM Varsity 2
Sun 09:50 AM Varsity 2
Mon 9:20 PM Varsity 2
Synopsis
An intimate coming-of-age story about a new kind of American heroine. In 2012, Women’s Boxing was included in the Olympics for the first time. Fighting for the gold, 17-year-old Claressa “T-Rex” Shields from the streets of Flint, Michigan, is undefeated and utterly confident. Outside the ring, she protects her family, even when their instability and addictions threaten to derail her. The one solid and reliable force in her life is her coach, Jason Crutchfield. As her chance at greatness in London grows closer, her relation- ships with her coach and her family become more complicated. But Claressa is determined. She desperately wants to take her family to a better, safer place — and winning gold could be her only chance. [language]

Directors’ Statement:
Zackary Canepari, Drea Cooper
From the moment we met her, we knew Claressa was special. We dropped everything to follow her, whether she made it to the Olympics or not. And now we have crafted a film that tells this truly historic and dramatic story. Claressa and her coach, Jason, invited us into their homes and over the last three years shared their most intimate encounters and deepest thoughts. As filmmakers we’re truly honored to be able to bring Claressa’s amazing story and spirit to the screen and share it with the world.
THANKS TO OUR SPONSORS