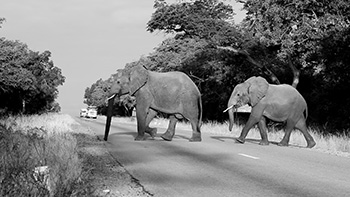 Documentary
75 minutes
2015
Director(s): Leslie Griffith
Africa, USA
whengiantsfall.com
Fri 09:30 AM Armory
Synopsis
Witness the magnificence of the African elephant and experience the gentle souls that lie within their awesome grey bulk. A century ago, they roamed all of Africa, but now they are left with only fragments of land and nowhere to run as they face extinction. These charismatic giants are under constant threat by fierce and unrelenting predators from the worldwide illegal ivory trade. A penetrating look at the endangered elephants, the criminals who hunt them, and the dedicated heroes trying to save them. [mature, subtitles]

Director’s Statement: Leslie Griffith
When Giants Fall showcases a monumental tragedy. We ask who is responsible, what can be done to stop elephant extinction, and how our own species can recover its humanity. Our search reveals that more than 1,000 new diamond, copper, uranium, and gold mines are adding to the demise of the elephants. Massive shipments of weapons are pouring into Africa. Most are smuggled in by the Russian and Chinese mafias. There are more than 50 ongoing wars, many involving soldiers who buy their guns directly with money from elephant ivory. We have had boots on the ground in seven countries over the past year, documenting the myriad players and intrigue.

Sneak Preview Screening
THANKS TO OUR SPONSORS