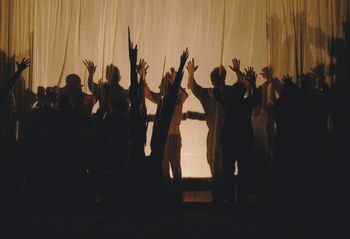 Once upon a time, villagers in a tiny hill town in Tuscany, Italy found a remarkable way to confront their issues, personal and political. They turned their lives into a play. Every summer for the past 50 years, their piazza becomes a stage, but like so many important artistic traditions, Teatro Povero is struggling to survive. Funding for the arts has disappeared, younger generations are losing interest, and playwright and director Andrea Cresti, now 75, who’s devoted his life to helping his village tell its story, may not return for the “Poor Theatre’s” 51st year. Subtitles

It was an honor to be the first filmmakers to record Teatro Povero di Monticchiello’s process from beginning to end. Fifty years of self-examination have given the villagers an unusual perspective on their world and, fortunately for us, enough curiosity and humor to open their lives up to two Americans with film equipment. The experience was utterly unique. We started the process as the ultimate outsiders—two people from Los Angeles who barely spoke a word of Italian when we arrived. But gradually, we began to realize how connected our stories are and how many of Monticchiello’s fears and experiences we all share. Five years later, this film has become a collaboration with a group of people we both admire and love.