The Freedom to Marry 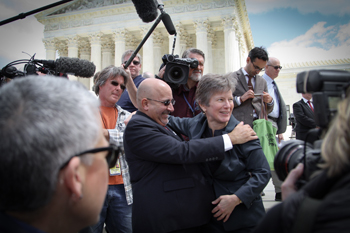 Documentary
86 minutes
2016
Director(s): Eddie Rosenstein
USA
freedomtomarrymovie.com/
Fri 12:00 pm Armory
Synopsis
An inspirational look at the culminating court battle that took same-sex marriage from a “preposterous notion” just a few decades ago to the law of the land today. “The Freedom to Marry” movement is now considered one of the most successful civil rights campaigns in modern history, but change did not arrive by happenstance. This victory was carefully planned and orchestrated over decades. The film tells the untold story of marriage equality’s brilliant mastermind, Evan Wolfson, and its passionate litigator, Mary Bonauto from the earliest days of their journey to their final, thrilling triumph at the US Supreme Court.

This film began with a question. My son had grown tired of my wife and me telling him to stand up for what he believes in. “Dad,” he said, “Regular people don’t have any power in this world. How do you really expect me to make a difference?” Thus, I made this film about the marriage movement because Evan Wolfson and his colleagues are indeed living proof that regular people really can change the world. Of course, what began as an inspirational story for my son is also an important message for us all. I hope you enjoy it.