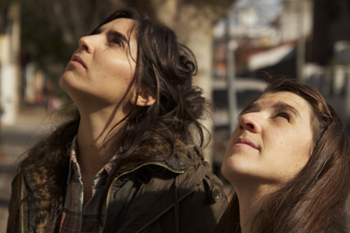 Feature
65 minutes
2012
Director(s): Matías Piñeiro
Argentina, USA
Thu 9:30 pm Varsity 5
Fri 10:00 am Varsity 5 RUSH
Sun 6:30 pm Varsity 5 RUSH
Synopsis
Viola is Matías Piñero’s mystery of romantic entanglements and intrigues among a troupe of young actors performing Twelfth Night in a small theater in Buenos Aires. The intersecting stories of three women across a single day present different theories of desire through dreams, verses and fiction in a world of Shakespearean women where mysteries are seldom solved, but love flows passionately. The film is a fascinating riff on
Shakespeare’s text for the contemporary world. Subtitles

Rosalinda and Viola came about because of the actresses. First is my approach to the text, and then it’s my relationship with the actresses. All of the actors in my movies are friends, people from film school or who work in theater in Buenos Aires. I started reading all of Shakespeare’s plays and I got very attached to his comedies. When I finished Rosalinda, I realized that Rosalind was not the only character that I liked and not the only character that could be used to build a relationship with the actresses I knew. When I had to move to New York to live, I thought, “Let’s shoot something before I leave this country,” and so we shot Viola in 10 days.
Playing with ...
Rosalinda 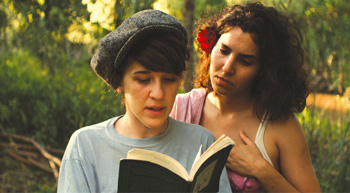 Feature
43 minutes
2016
Director(s): Matías Piñeiro
Argentina
Thu 9:30 pm Varsity 5
Fri 10:00 am Varsity 5 RUSH
Sun 6:30 pm Varsity 5 RUSH
Synopsis
One of three AIFF2017 films by Matías Piñero, Rosalinda follows a group of young actors rehearsing As You Like It and engaging in a series of games and romantic interludes. Set in pastoral environs along the El Tigre delta north of Buenos Aires, this brief narrative will screen with Viola, which features the same cast and also playfully explores Shakespeare’s women characters. Subtitles

I really had a hard time with Rosalinda and subtitles because it’s so complex what they say. There are so many words. It was like a ping pong game of dialogue. That she’s a girl dressed like a man pretending to be the girl she actually is, is great to watch, to act out, but reading the words on screen is not the same thing. It was easier with Viola, which has something more like a series of monologues. Still, there are too many words. At one point, I thought I should do like Jean-Luc Godard in Film Socialisme, and only put nouns in the subtitles or something like that. I have not yet come up with a way of totally fixing the situation. There is always some loss by the time the viewer is reading the subtitles.
THANKS TO OUR SPONSORS