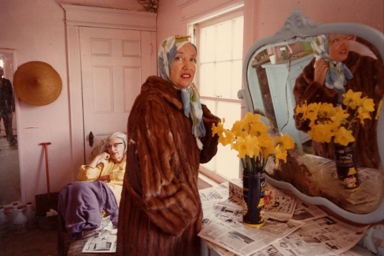 This cult classic is the story of Edith Bouvier Beale and her 56 year-old daughter Edie, the aunt and first cousin of Jacqueline Kennedy Onassis. They live in a world of their own behind the towering privets that surround their decaying 28-room East Hampton mansion known as "Grey Gardens," a place so far gone that the local authorities once threatened to evict them for violating building and sanitation codes. The incident made national headlines: American royalty, living in squalor! "Little Edie" was an aspiring actress of striking beauty who put her New York life on hold to care for her mother and never left her side again. Together they descended into a strange life of dependence and eccentricity that no one had ever shared until the Maysles arrived with their camera and tape recorder. The women bicker, prattle, and flirt like characters out of Tennessee Williams or Eugene O'Neill. [language]

Trivia: The film was an accident in the sense that Albert Maysles and David Maysles came across Edith Bouvier Beale and Edith 'Little Edie' Bouvier Beale when involved in another project - a movie about (Jacqueline Kennedy's sister) Lee Radziwill's childhood. As part of research, the Maysles brothers were introduced to the two Edie Beales, and were captivated by their world. Deciding not to make the Radzwill film, they turned instead to the Beales, and a year after first meeting the two women, began filming.