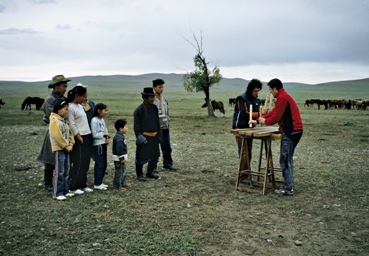 Documentaries
86 minutes
2006
Director(s): Raul De La Fuente
Spain
Fri 6:10 pm Varsity 4
Sat 12:10 pm Varsity 4
Sun 3:10 pm Varsity 4
Mon 9:10 pm Varsity 4
Synopsis
Two musicians travel with a txalaparta, a traditional Basque instrument that is played by two people at the same time. It does not belong to either of them, but originates from their perfect dialogue. They arrive in India, Lapland, the Sahara and Mongolia to fuse their music with that of remote nomadic peoples- each encounter resulting in unique music.

They cross frozen wastelands and deserts, on horseback in the mountains of the Siberian border and by train in the west of India. They travel in search of sounds. And they find them in other nations, in other surroundings, in other cultures, in other people. This visually stunning film has little dialogue and relies, instead, on music as the common language. For world music mavens and hipster armchair travelers alike, this film uses images and rhythms to demonstrate how small the world can be. [subtitles]