A Snow Mobile for George 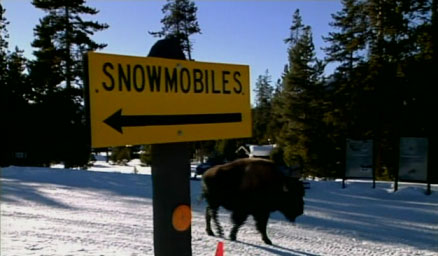 "The political and commercial morals of America are not merely food for laughter, they are an entire banquet." -Mark Twain

Fired up by a question over a used snowmobile in the Sierra Nevada, filmmaker Todd Darling takes a road trip across America in search of what drives environmental policy in the Bush administration.
He visits Yurok Indians in Northern California who see their salmon runs decimated when Executive Branch officials divert the Klamath River to irrigation districts. A thousand miles east, he meets Wyoming cowboys locked in a range-war with oil companies, the result of a political appointee suppressing pivotal clean water rules. Finally on the opposite coast, Wall Street workers in New York City worried about their health, wonder why, in the wake of 9-11, a top White House official bypassed rules about how to handle a fallen building. This wry filmmaker discovers the personal costs of deregulation and, thanks to his snowmobile, uncovers a sophisticated political strategy.