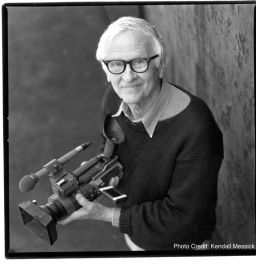 This program is a rare, self-portrait - in his own words and with many film clips – Albert Maysles will help us celebrate his over 50 years in filmmaking. Maysles will illustrate the challenges and issues in his development as a filmmaker.

Stories and outtakes will be selected from the scores of documentaries Albert and his late brother David made or contributed to, including Primary, Monterey Pop, What's Happening! The Beatles in the USA, Salesman, Grey Gardens, Gimme Shelter, the Christo Projects, Horowitz Plays Mozart as well as more recent films such as, Muhammad and Larry, Abortion: Desperate Choices,  The Gates, and The Dalai Lama in New York.

Clips could include interviews with, and footage of, The Beatles, Leonard Bernstein, Marlon Brando, Orson Welles, Truman Capote, Martin Scorsese and more.

Albert Maysles began with a childhood interest in photography, then an M.A. in psychology and travels in Russia where he shot photographs inside mental hospitals. Although he was unsuccessful in selling those pictures, he managed to obtain a movie camera from CBS the following year and on a return visit shot his first documentary Psychiatry in Russia (1955). He and his brother David shot footage of a student revolt in Poland which aired on NBC in 1957. After their work on Primary, a documentary about the 1960 Democratic Humphrey vs. Kennedy racethe Maysles were selected by Grenada Television to shoot the US arrival of a new rock and roll band, resulting in What's Happening! The Beatles in the USA (1964).

Albert Maysles:  "I've always been an adventurer. And the more wild the adventure, the more interesting it would be.  Every documentary is sort of an adventure into the heart and soul of certain people.  At least, that's what it should be."