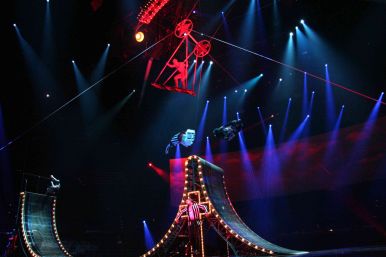 Documentaries
84 minutes
2008
Director(s): Adrian Wills
Canada, UK, U.S.A.
Fri 3:00 pm Armory RUSH
Sat 9:00 pm Armory RUSH
Synopsis
One of those rare times in history when two stellar groups of artists come together to create one outstanding show is captured on film. Fueled by a dream from George Harrison and avant-garde performance troupe Cirque du Soleil director Guy Laliberte comes the stage show LOVE, a visual and musical circus spectacular. With rare Beatles archival footage, beautifully documented LOVE, rehearsal footage and often hilarious interviews with all parties involved, All Together Now tells the tale of passion and perspiration that goes into preparing the latest Cirque show Laliberte, in consultation with The Beatles, creates a new piece of work through a series of innovative ideas that include hiring longtime Beatles producer Sir George Martin to create a new soundtrack limited to mixing and matching recordings only from the original sessions. The results are undeniably enjoyable, and All Together Now is a film for every Beatles or Cirque du Soleil fan.
Before each Ashland screening of All Together Now, Ashland's Le Cirque Centre’s TILT Dance Theatre will perform four exclusive acts on rope, silks, and lyra (aerial hoops).