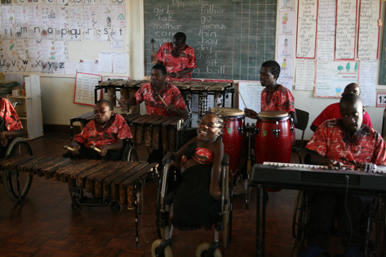 Music by Prudence will also play with Kavi & The Last Truck: Closing of a GM Plant in our TBA: 3 spot at 3:20p on Monday, April 12th!

Zimbabwean Prudence Mabhena is born with a rare congenital disorder that deforms her body's joints. But she does not let her physical limitations define her. Prudence is a singer-songwriter who radiates hope, projecting it until the audience, too, becomes infected. It is a miracle that she is singing at all, born into a society where disabilities carry the taint of witchcraft. She was more likely to spend her life closeted in a tiny hut in a rural area than on a stage in the center of a city. But Prudence and her seven band members, all disabled, have managed to overcome stereotypes and inspire the same people that once saw them as a curse. Oscar-winner for Best Documentary: Short Subject. [subtitles]

Kavi will also play with Music by Prudence & The Last Truck: Closing of a GM Plant in our TBA: 3 spot at 3:20p on Monday, April 12th!

Kavi wants to play cricket and go to school, but instead is forced to work in a brick kiln as a modern-day slave. Unsatisfied with his fate, Kavi must choose to either accept what he's always been told, or fight for a different fate even if he's unsure of the ultimate outcome. Oscar nominated for Short Film: Live Action. [subtitles, violence]

The Last Truck: Closing of a GM Plant

The Last Truck: Closing of a GM Plant will also play with Kavi & Music by Prudence in our TBA: 3 spot at 3:20p on Monday, April 12th!

On December 23, 2008 the General Motors assembly plant in Moraine, Ohio shut its doors. 3,000 workers lost both their jobs and the camaraderie built through the years. To the natives of Moraine and the greater Dayton area, GM wasn’t just a car company-  it was the lifeblood of the community. Four employees armed with cameras capture the final months: Kim, an electrician; Kathe in body shop; Kate, a forklift operator; and Popeye, a toolmaker. Intimate interviews with people who considered themselves more family than co-workers reveal the emotional toll of losing not just a job, but a sense of self. This Oscar-nominated film bears witness to the experience of job loss and offers a snapshot of a moment that may portend the end of the nation's blue-collar middle class. See also Convention, by the same filmmakers.