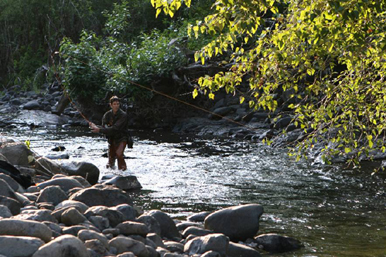 Feature
101 minutes
2010
Director(s): Matthew Leutwyler
USA
theriverwhy.com
Fri 12:00 pm Armory RUSH
Sat 6:00 pm Armory RUSH
Synopsis
Set and filmed in Portland and on the banks of a wild river near the Oregon Coast, the film is based on the classic novel by David James Duncan (The Brothers K). Twenty-year-old Gus Orviston (Zach Gilford of the TV hit Friday Night Lights) is the Mozart of fly-fishing. His father, Henning Hale Orviston, (William Hurt, The Big Chill) or "H2O" to Gus, is the Dean of American trout fishermen—tweedy, knowledgeable and confident. He represents all that Gus is not. His mother is H2O's polar opposite- down-to- earth and feisty. Gus leaves his parents' home and the city for what he thinks is fly-fishing bliss- living in a cabin, fishing all day, and figuring out the meaning of life. He becomes increasingly lost and lonely but eventually meets an assortment of eccentric characters that help him in his journey of self-discovery, including the philosophical Titus and a fishing-obsessed woman named Eddy with whom he falls hopelessly in love. This is a work-in-progress screening as a thank you to Oregon. [adult content]

See Greenlit for a documentary on the efforts to film The River Why in an environmentally-friendly way.
THANKS TO OUR SPONSORS