TBA: 2, The Most Dangerous Man in America: Daniel Ellsberg and the Pentagon and Lone Wolf 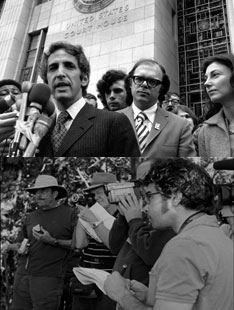 100 minutes
Director(s):
Mon 12:20 pm Varsity 2 RUSH
Synopsis
The Most Dangerous Man in America: Daniel Ellsberg and the Pentagon and Lone Wolf have been assigned to the TBA:2 slot on Monday, April 12th!

Brief Synopses of selected films (click on the links above for more info on each film):
The Most Dangerous Man in America: Daniel Ellsberg and the Pentagon- This Oscar-nominated film follows ellsberg's profound change of heart as he leaked the truth about the Vietnam War to help end the conflict he helped plan. A piercing look at the world of government secrecy as revealed by the ultimate insider. [violence]
Lone Wolf- On July 8, 2005, blogger and activist Josh Wolf filmed an anti-G8 protest that turned violent and a police officer was injured. After selling his edited video footage, Josh was subpoenaed by a federal grand jury. Josh refused to be the government's informant and was jailed for 226 days. The film examines Josh's current journalism job and his past as a jailed blogger who struggled to get the media establishment to acknowledge that he is a legitimate journalist.

TBA Explanation
This year we have reserved five time slots on Monday, April 12th for films that may require additional screenings due to ticket demand than exceeds our initial availability.