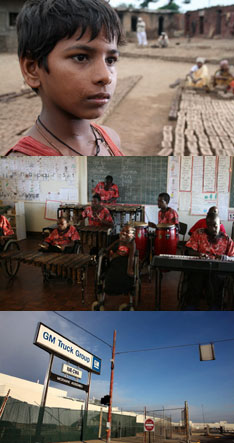 Brief Synopses of selected films (click on the links above for more info on each film):
Kavi- Kavi wants to play cricket and go to school, but instead is forced to work in a brick kiln as a modern-day slave. Unsatisfied with his fate, Kavi must choose to either accept what he's always been told, or fight for a different fate even if he's unsure of the ultimate outcome. Oscar nominated for Short Film: Live Action. [subtitles, violence]

Music by Prudence- Born into a society where disabilities carry the taint of witchcraft, Zimbabwean Prudence Mabhena has a rare congenital disorder that deforms her body's joints. Prudence is a singer-songwriter who radiates hope, projecting it until the audience, too, becomes infected. Prudence and her seven band members, all disabled, have managed to overcome stereotypes and inspire the same people that once saw them as a curse. Oscar-winner for Best Documentary: Short Subject. [subtitles]

The Last Truck: Closing of a GM Plant- The inside story of the last days of a General Motors plant in Moraine, Ohio, as lived by the people who worked the line. Four employees armed with cameras capture the final months: Kim, an electrician; Kathe in body shop; Kate, a forklift operator; and Popeye, a toolmaker. To the natives of Moraine and the greater Dayton area, GM wasnÕt just a car company-  it was the lifeblood of the community.

TBA Explanation
This year we have reserved five time slots on Monday, April 12th for films that may require additional screenings due to ticket demand than exceeds our initial availability.