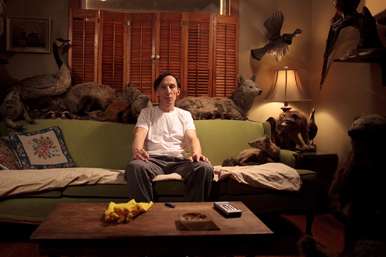 In this wonderfully bizarre story, three lonely people search for love on the frozen plains of North Dakota. A mysterious vagrant driving the deserted roads, fills his cars with souvenirs from the abandoned homes he’s pillaged, taking what he needs to survive. When he stops to help a nearly frozen local man, we see his eagerness to connect with another human. When the vagrant learns that the local is on his way to meet his incarcerated pen pal girlfriend for the first time things start to get complicated.  In all three of the characters there is a sense of wonder at the possibilities in store as they thirst for affection. But, blinded by his desire for love, the vagrant takes matters into his own hands—forever changing the destinies of all three people in this off-beat black comedy. [adult content]