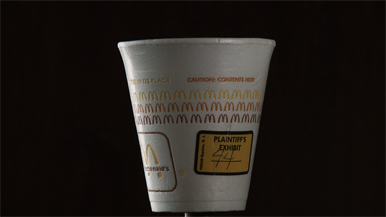 Everyone knows about the McDonald's coffee lawsuit. It has been routinely cited as an example of how citizens take advantage of America's legal system, but is that a fair rendition of the facts? Ashland attorney Susan Saladoff put her career on hold to become a filmmaker and tell the story of the Albuquerque woman who spilled coffee on herself and sued McDonald's. Saladoff explores how and why the case garnered so much media attention, who funded the effort and to what end. For many Americans, the case has become emblematic of the frivolous lawsuits that clog our courts. Using this now infamous legal battle as a springboard into investigating our civil-justice system, Saladoff follows four people whose lives have been devastated by their inability to access the courts. As she exposes the way corporations have spent millions using this case to promote tort reform, Saladoff offers surprising evidence of the impact on your daily life. [adult content]