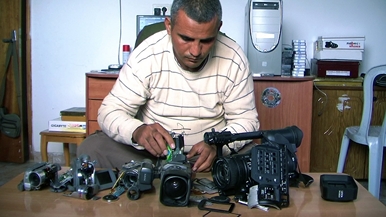 Emad Burnat, farm laborer and self-taught videographer, gets his first camera to record the birth of his son, Gibreel. He also begins filming the bulldozers as they rip out olive trees belonging to his family and his West Bank village. Over the next five years, as workers erect a wall to separate advancing Jewish settlements from the Palestinians, resistance to the wall grows more hostile. As demonstrations and reprisals escalate Emad keeps filming, despite pleas from his wife who fears reprisals. His first camera — then his second, third, fourth and fifth — are each destroyed by the violence and ever present Israeli soldiers.

Scenes of Gibreel’s five birthday parties alternate with assaults, brutality and death amid the gorgeous imagery of ancient olive groves. The result is one man’s intensely personal, powerful document about a community’s struggle against violence and oppression. As Emad states: “I film to heal, so I’ll just keep filming.” [subtitles, violence]