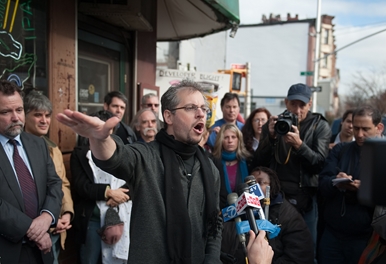 A chronicle of one community's fight against a well-funded private project that would destroy their neighborhood. The focus is Daniel Goldstein, a reluctant activist whose apartment would be demolished to make way for the controversial Atlantic Yards complex: sixteen luxury high-rise buildings — plus a New Jersey Nets basketball arena—designed by celebrity architect Frank Gehry.

Goldstein helps start an organization to oppose the project, explore alternatives and ask questions. Do the rules of eminent domain apply to private enterprise? How can jobs and race be used as wedge issues? What is the definition of “blight?” Shot over seven years, this intense, intimate film is a primer on grassroots activism that will inspire people to look deeper into the issues that affect their lives. With cameo appearances by Michael Bloomberg, George Will, Steve Buscemi, John Turturro, Jay-Z, Rosie Perez, and Reverend Billy of the Church of Life after Shopping.