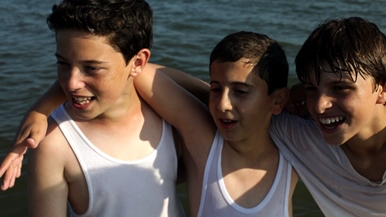 As the son of the Imam of the local Brooklyn mosque, eleven year-old Daud has to juggle the high expectations of his Father (Maz Jobrani) and his feelings of isolation and difference— even from his peers in the Muslim community. Through an innocent act of good faith, Daud inadvertently befriends a group of Jewish boys who mistake him as a fellow classmate at their orthodox school, in the neighboring Jewish community.

A genuine friendship grows between Daud and Yoav, one of the Jewish boys, and his family. Unable to resist the joy of a camaraderie that he has never felt before, David, as he is known to the kids, is drawn into a complicated dilemma inspired by youthful deceit and the best of intentions. This sweet film offers a hopeful message about family, culture, and community, as socio-political barriers give way to friendship. [family-friendly age 10+]