Plimpton! Starring George Plimpton as Himself 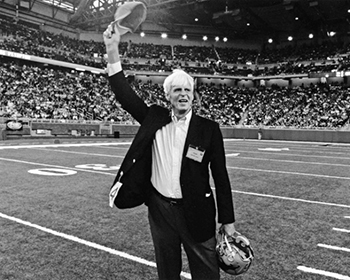 Documentary
86 minutes
2012
Director(s): Tom Bean & Luke Poling
USA
plimptonmovie.com
Fri 3:40 PM Varsity 3
Sun 10:10 AM Varsity 3
Mon 3:40 PM Varsity 3
Synopsis
George Plimpton was one of the twentieth century’s most interesting characters — a remarkable writer, editor, amateur sportsman, and friend. George co-founded the Paris Review and was its editor for fifty years. He also founded participatory journalism, and his work with Sports Illustrated and later in books like Paper Lion gave millions of people an inside look into a world they only watched on TV or read about.

George threw some of the greatest parties New York has ever seen. He was a warm and genuine person whose phone book was bursting with the names and numbers of the most fascinating people in art and literary circles. Using Plimpton’s own narration, plus stories from friends, family, and contemporaries, Plimpton! Starring George Plimpton as Himself is a joyful celebration of a full, rich, strange life that at times is hard to believe was actually lived by just one man.
THANKS TO OUR SPONSORS