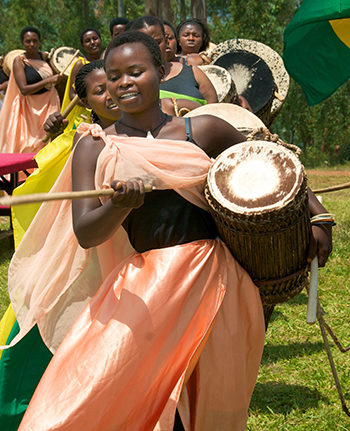 Documentary
89 minutes
2012
Director(s): Rob Fruchtman & Lisa Fruchtman
USA
sweetdreamsrwanda.com
Thu 6:00 PM Varsity 1
Fri 9:30 AM Varsity 1
Sat 12:00 PM Varsity 1
Synopsis
In 1994, Rwandans suffered one of the worst genocides in history. Ten years later, Odile Kiki Katese, a pioneering Rwandan theater director, founded Ingoma Nshya, Rwanda’s first and only women’s drumming group, offering safety and healing for women from both sides of the conflict. Each of the group’s members is a survivor of the genocide. Some lost their families; some were raped. Others are wives or children of perpetrators.

Then Kiki met the owners of Brooklyn’s Blue Marble Ice Cream Shop and had an idea. She invited them to come to Rwanda to help open the country’s first ice cream store, named Inzozi Nziza (Sweet Dreams). Ice cream, she argued, could be both a sustainable way to create desperately needed jobs, and a source and symbol of joy in a country emerging from tragedy. Reconciliation must not only be with one another, Kiki says, but with happiness, with hope, and with life. [subtitles]
THANKS TO OUR SPONSORS