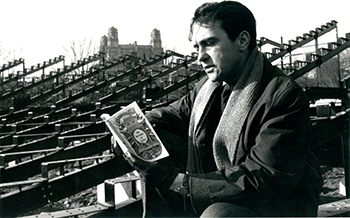 Documentary
84 minutes
2012
Director(s): Tracie Holder & Karen Thorsen
USA
joepappfilm.com
Sat 9:30 AM Armory
Mon 6:40 PM Varsity 3
Synopsis
Meet Joe Papp, the indomitable, street-wise champion of the arts who brought more theater to more people than any other producer in history. Perhaps best known for the free, cutting-edge productions of NYC’s Shakespeare in the Park, his other great achievement was creating the Public Theater, where he nurtured a Who’s Who of actors, directors, and writers, including Meryl Streep, Kevin Kline, James Earl Jones, Martin Sheen, Ntozake Shange, and Larry Kramer, and championed such works as Hair and A Chorus Line.

Joe Papp spent a lifetime expanding public access to the arts. We have public libraries, he argued. Why not public theaters? Papp’s great accomplishments and his own tumultuous personal history are told by the artists he helped create — and sometimes tried to destroy.
THANKS TO OUR SPONSORS