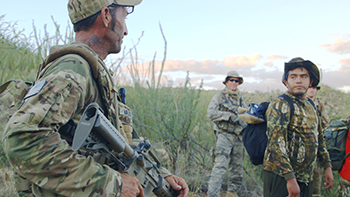 Documentary
98 minutes
2015
Director(s): Matthew Heineman
USA, Mexico
cartellandmovie.com
Fri 3:00 PM Varsity 1
Sat 9:00 PM Varsity 1
Sun 6:00 PM Varsity 1
Synopsis
Filmed with exceptional access, this is a spellbinding exposé of the vigilante groups fighting against the vicious drug cartels in the area known as “Cocaine Alley” south of Tucson, Arizona, and in Michoacán, Mexico. Focusing on the efforts of veteran Tim “Nailer” Foley — who heads a paramilitary group fighting to keep the drug wars from seeping into the US — and Dr. José Mireles — a Mexican doctor who shepherds a citizen uprising against the violent drug cartel — the film is a chilling meditation on the breakdown of order and the blurry line between good and evil. [mature]

Director’s Statement: Matthew Heineman
At its heart, this is a vérité film shot mainly in run-and-gun situations. As much as possible, my goal was to make the doc feel like a narrative film — the setting, the situations, the characters were all very cinematic, so I tried to capture it in this way. For our interviews (which were shot from the side with me asking questions directly behind the camera), I wanted our subjects to look directly into the lens for two reasons. First, I wanted it to play like the rest of the film: intimate and without my presence. Second, in some sense, the film is a complex morality tale, and I wanted the interviews to feel like testimonials — like it was their version of the truth.
THANKS TO OUR SPONSORS