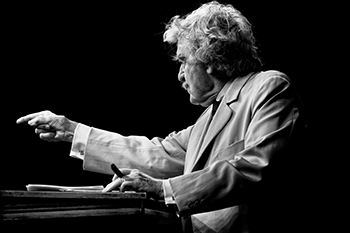 Documentary
90 minutes
2014
Director(s): Scott Teems
USA
Fri 3:00 PM Armory
Synopsis
Hal Holbrook first walked onstage as Mark Twain in 1954 and has performed his renowned one-man show Mark Twain Tonight! every year since. He has performed in all 50 states, in 20 countries, on Broadway, and before five US Presidents. Generations have seen the show, and countless actors have been influenced by his work. This documentary, at once an exploration of the actor’s craft and a revealing study of the relevance of Twain’s writings today, is a behind-the-scenes look into the heart of America’s most esteemed satirist and the actor who has brought him to life for nearly 60 years. Featuring Sean Penn, Richard Chamberlain, Annie Potts, and Martin Sheen.

Director’s Statement: Scott Teems
I first met Hal Holbrook and Dixie Carter (Hal’s wife) in 2008. At that first meeting, Dixie told me her longtime dream was to see a film made about the Twain show. And she told me I was the one who would make it! As anyone who ever had the privilege to know her can attest, she could be a very persuasive woman. So she kept on me about the documentary,telling me how important it would be, telling me it was a story the world needed to hear. But it wasn’t until I finally saw the show for myself that I realized she was right, and I realized how much I wanted to tell this story.

Sponsored by Rogue Creamery
THANKS TO OUR SPONSORS