How to Smell a Rose: A Visit with Ricky Leacock in Normandy 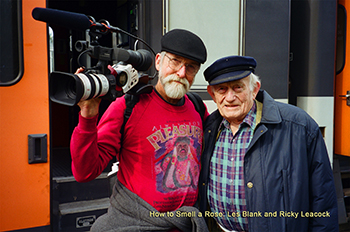 Documentary
64 minutes
2014
Director(s): Les Blank, Gina Leibrecht
USA
ginaleibrecht.com/#how-to-smell-a-rose
Thu 3:40 PM Varsity 3 RUSH
Fri 10:10 AM Varsity 3
Sat 3:40 PM Varsity 3 RUSH
Synopsis
“How do you teach someone to film?” documentary luminary Richard Leacock asks legendary filmmaker Les Blank. “How do you teach someone to smell a rose?”
In 2000, Les Blank (AIFF Artistic Achievement Award honoree) and co-director Gina Leibrecht brought their camera on a visit to Leacock and Valerie Lalonde, Leacock’s wife and collaborator, at their home in rural France. From that footage comes a bittersweet valentine to two documentary trailblazers suffused with their passion for life, cinema, and — not least of all — food. Rustic meals and long walks blend with memorable moments from Leacock’s 70-year career that has inspired generations of filmmakers. With the passing of both Blank (in 2013) and Leacock (in 2011), the documentary leaves behind a vibrant, joyous record of two men who knew how to experience — and capture — life’s richness.

Director’s Statement: Gina Leibrecht
Les Blank first met Richard Leacock in the late 1960s. They became mutual admirers of one another’s work and their friendship endured until Leacock’s death in 2011. In the late 1990s, Leacock had retired and was living on a farm in Normandy. Blank brought his young collaborator — me — on a visit, and together, we collected Ricky’s stories about his long career as a filmmaker, innovator, and fabulous cook! The film was put on the back burner for over a decade, but shortly before Blank’s death in 2013, he asked me to finish the film without him. 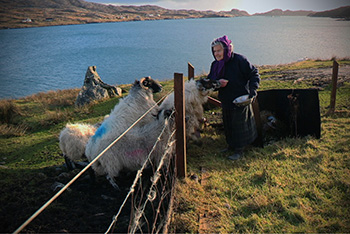 Short Documentary
14 minutes
2014
Director(s): Rosie Reed Hillman
Scotland
Thu 3:40 PM Varsity 3 RUSH
Fri 10:10 AM Varsity 3
Sat 3:40 PM Varsity 3 RUSH
Synopsis
Morag lives alone in the house where she was born 86 years ago. It sits at the end of a road on the Outer Hebrides in Scotland and looks out on the breathtaking sea. Life is simple and peaceful for her and her three cats and twelve sheep. A lovely glimpse into Morag’s unique sense of independence, her attitude toward mortality, and the connection she has to her wild island home.

Director’s Statement: Rosie Reed Hillman
Meeting Morag was a privilege and making Cailleach a labor of love. Her character and story have much to teach those of us entrenched and preoccupied with busy city lives. I shot and edited the film in midwinter and late pregnancy, which certainly had its own challenges, but it was lovely to undertake such an adventure and share both the filmmaking process and the anticipation of my baby with Morag.
THANKS TO OUR SPONSORS