In Football We Trust 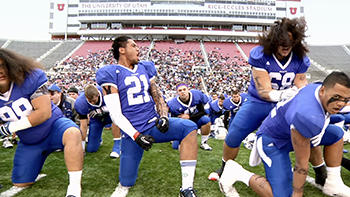 Documentary
87 minutes
2015
Director(s): Erika Cohn, Tony Vainuku
USA
infootballwetrustmovie.com
Thu 12:00 PM Varsity 1
Sat 6:00 PM Varsity 1
Sun 09:30 AM Varsity 1
Synopsis
This new take on the American immigrant story follows the journey of four young Polynesian men as they strive to realize the American dream of playing football in the NFL. Shot over four years, the film follows the close-knit world of transplanted Pacific Islanders and their families in Salt Lake City, Utah. Facing daunting societal and family pressures, the four players struggle against poverty and gang violence as they progress from adolescence to manhood. Soon they are entrenched in the high stakes world of collegiate and NFL recruitment. Charismatic, passionate, and determined, the young men hope to make it big in the game they love almost as much as they love their families and community. [language]
Directors’Statements: Tony Vainuku, Erika Cohn 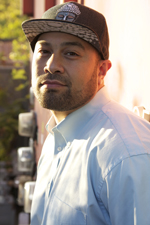 Tony Vainuku: I am first generation Tongan American; born and raised in Salt Lake City, Utah. Growing up, most kids in my neighborhood looked up to notorious gang members, but a few set their sights on professional athletics - looking up to the Polynesian NFL players, pioneers for our culture in American sports. After watching my talented uncle set his path on the NFL and ultimately fall back into gang-life, I began searching for an opportunity to address the Polynesian experiences and my family’s struggles through filmmaking. In Football We Trust is the beginning of a lifelong career in sharing my perspective of the immigrant experience.

Erika Cohn: As a result of playing sports through high school, I immediately identified with the highs and lows of competitive athletics and felt strongly about using sport as a catalyst to address larger societal issues. Then I met our four subjects, whose rare vulnerability and charisma deeply struck me and knew their stories needed to be told. In the film, we see our subjects strive for the perceived promise of the NFL. The “American Dream” phenomenon fascinates our society, however, I believe this infatuation can often leave people entrenched in the very conditions they are striving to overcome.
THANKS TO OUR SPONSORS